What Matsui Can Teach about Education & Community

In 2009 the Yankees won the world series against the Philadelphia Phillies…mostly because of Hideki Matsui.  Now, this is just personal opinion, but I am not the only one that feels this way.  That night, Matsui became the first Japanese-born player and full-time designated hitter in the history of MLB to win the world series MVP award.  Matsui was my favorite athlete even before this happened, so I was of course extremely upset when the Yankees did not sign him the next season.  And although Matsui played for other teams, he remained my favorite player, never forgotten by Yankees fans and non-Yankees fans.  And it was yesterday afternoon that Matsui signed a minor league contract with the Yankees, officially retiring as one.

I sat teary-eyed through the entire ceremony not because Matsui is my favorite athlete but because of what he stands for.  The best way to describe Matsui is quiet, humble strength.  You see, Matsui is the only Yankee to hit a grand slam at his first, I mean first, at bat.  He went 4-4 and 3-4 on his first two days back after returning from wrist surgery that had him out for several months.  And through it all, Matsui remained humble and a true definition of a team player.  He actually apologized for getting injured, and shies away from talking about himself.  He has stated that he felt like he didn’t deserve the MVP award, and although most players would name this as their shining moment in their career, Matsui named a victory against the Boston Red Sox as his favorite moment because the Yankees won the game in a total team effort.

The way I feel about it is that one can be a great baseball player and have awesome numbers, but if your attitude sucks and you’re all about yourself then, to me, those numbers mean absolutely nothing.  Besides his quiet strength and humility, what I like most about Matsui is that the man has a sense of humor.  He is known for playing jokes on his teammates and every once in a while you could catch him making faces at the camera.  Oh, how I miss watching him play!

So, how does this relate to education?  Well, say there was this great teacher, and you asked him or her what their best/favorite moment was in their profession.  What would you think if the teacher said, “Winning educator of the year” as opposed to “Watching my students evolve” or “Seeing my students light up when they understand something” or “One of my students telling me that I’m their role model”? Matsui represents greatness by being great through others.  One is a great player and a great teacher through the action, influence, and aid of those outside themselves.  With education being more and more about testing and numbers and treating students like they’re all the same, I know that it can be quite difficult to truly teach and help a student. 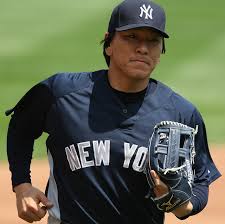 Matsui represents how a community should be.  A community should be, well…a community.  This simply means placing others above yourself and being there for them and actually caring.  Matsui reminds me of who I am, who I want to be, and who I have to be in order to consider myself truly successful.  I am only as great as the impact that my words and life has on others.

Thank you, Hideki Matsui.  I hope and pray that one day I can share these words with you in person.

Posted in About Me, Education, Life